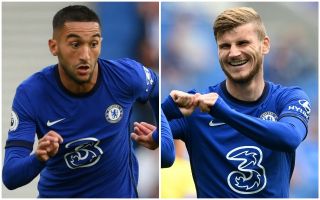 The Dutchman was one of the finest strikers of the early part of the Premier League era, and scored 87 goals in 177 appearances with the west London giants.

So he’s a decent person to pass judgement on Chelsea’s new big-name signing up front, with Werner due to become the main man in Frank Lampard’s attack next season.

Hasselbaink sounds optimistic about what Werner can bring to the team, telling GentingBet, as quoted by the Metro: “We know he’s a talented player. We know what he can do. And Chelsea need a player that can score goals.

The 27-year-old looks like just the player CFC need as a replacement for Eden Hazard, but Hasselbaink sounded a note of caution about how he might need to adapt his game in the Premier League.

Discussing his qualities and how he might settle, Hasselbaink said: “He is very creative, has an excellent left foot, is very good at set pieces and I expect a lot of assists from him.

“He’s got that aura around him in that he wants the ball. He wants that responsibility, he’s not afraid to score goals.

“Physically, he’ll possibly have a problem in the beginning, so he has to be smarter with his physical ability.”