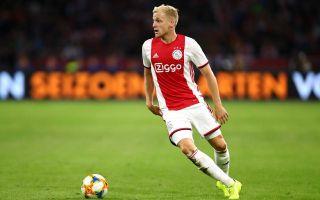 We’re starting to see an interesting change in player’s habits when they make transfer decisions – it’s no longer always about chasing the money and going to the biggest team, but doing what’s best for their career.

Man United have officially unveiled Ajax midfielder Donny van de Beek and he looks like a potentially fantastic signing, but it’s also emerging that there was some serious competition for his signature.

Real Madrid would usually expect to sign any player they want, but it looks like their better financial offer wasn’t enough to prevent him from going to Old Trafford:

You have to think that Ole Gunnar Solskjaer made a big pitch to the Dutchman to convince him that he would be a key part of the team and explaining where he would fit in, while he’s also more likely to play regularly at Man United just now.

Real Madrid have a stacked midfield with younger players pushing for a first team spot too, so van de Beek would be simply another player if he want there instead.

It’s going to be exciting to see how he adapts to life in the Premier League, but it’s also interesting to see how close he was to moving to Spain instead.