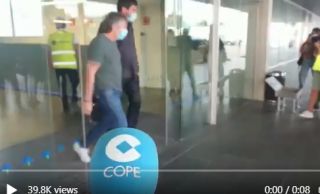 Lionel Messi’s father Jorge Messi has been spotted arriving in Barcelona, supposedly for talks over his son’s future at the Nou Camp.

See below as Messi senior is mobbed by a crowd upon his landing in Barcelona, as one of the biggest transfer sagas of all time continues to hot up…

Messi could well be on his way out of Barca to seal a sensational transfer to Manchester City, with the Daily Record claiming he’s agreed a huge contract to move to the Etihad Stadium.

It would truly be something special to see Messi in the Premier League at some point in his career, so it will be interesting to see how his father’s talks with Barcelona progress.