There are many things that ruin football and widen the gap between the elite teams and everyone else, but buy back clauses are up there with the worst.

We’re seeing too many examples of a team taking a young talent and developing them into a star player, only for a big team to buy them back for a reduced price and sell them on for a massive profit.

Of course any team is within their rights to include those clauses when they sell someone on, but it completely ruins the chances of a smaller team selling someone for a huge fee that could completely revolutionise the club.

Chelsea had that kind of clause with Sassuolo for their former player Jeremie Boga, but a report from The Guardian has suggested they’ve actually done the decent thing.

It sounds like Chelsea had the option to bring him back for £13m and then sell him on as there is plenty of interest, but they decided to ignore that option and negotiated a sell on clause with the Italian side instead.

That now look set to pay off, with Footmercato reporting that Rennes are looking to sign the winger this summer, and he could end up costing as much as €30m.

There’s no credible report which states what percentage of the fee Chelsea will be entitled to, but it sounds like a handy windfall could be coming their way, 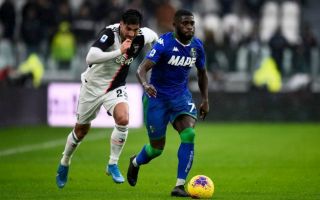