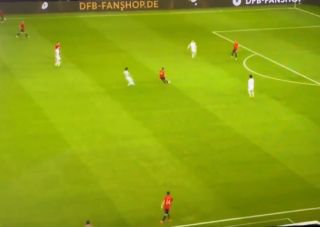 Things have gone a bit quiet on the Thiago Alcantara to Liverpool front, but he’s on international duty with Spain so he can’t be expected to be completing any transfers just now.

Sky Sports reported that Jamie Redknapp believes he would bring some finesse to the Liverpool team, and he demonstrated his vision for Spain tonight:

Thiago playing passes that are not even in camera.

Yes it’s an isolated clip so you can argue the relevance, but it also shows that he knows where everyone on the pitch is and he has the vision and more importantly, the ability, to pull off these kinds of passes.

Liverpool were formidable enough last season but if they add a midfielder with the ability to see and make a pass that gets someone in a good position before the opposition can figure out what’s happened, then he’ll actually improve them.