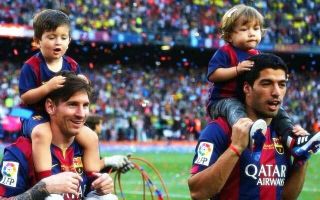 It seems remarkable to think that we’ve spent the last couple of weeks trying to decide what Lionel Messi was going to do, only for him to announce he would be staying at Barcelona after all.

It’s likely that the whole circus will return next summer when his contract expires and a transfer will be possible, but this recent update from the club confirms that the main man will be staying for now:

??? Leo #Messi: “I will give it my all. My love for Barça will never change.” pic.twitter.com/xBh29dTqpr

It’s well known that Messi and Luis Suarez are best friends on and off the pitch, so it’s interesting to see that Suarez may be staying now after a move to Juventus looked certain.

A report from Get Football News Italy has quoted Gianluca Di Marzio in saying that Juventus were now struggling to finalise a deal with Suarez, so they had turned their attentions to Edinson Cavani instead.

READ MORE: Relief was short lived for Barcelona as Man City still expect to sign Messi for free next summer

It could be a total coincidence, but there is something interesting in Messi’s best friend looking likely to stay after the Argentine performed a U-turn himself.