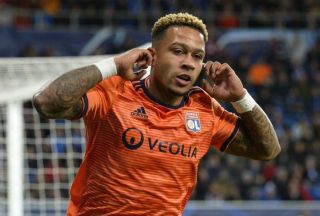 Barcelona are reportedly closing in on a swoop for Lyon forward Memphis Depay, and it’s suggested that they’ll splash out €25m to sign him.

The Catalan giants are going through a summer of change this year as after their bitterly disappointing campaign last time round, they will be looking to get back on track.

Ronald Koeman was appointed as their new boss and there have already been exits from the squad, while Lionel Messi confirmed his intention to stay at the Camp Nou on Friday after weeks of speculation noting that he wanted out.

It appears as though with that matter now settled, Koeman will start to add reinforcements and as reported by AS, Depay could be one of the first to arrive at the club in a €25m deal.

It’s added that Koeman specifically requested his compatriot as he will know him very well having worked together during his time as Netherlands boss, and so Depay will undoubtedly become a key figure for him at Barcelona if they do indeed wrap up a deal to take him to Spain.

With Luis Suarez one of the ageing stalwarts being linked with an exit, Depay will perhaps look to fill that role up top, although he has proven that he can play across the frontline and so he will be a useful, versatile option for Barca if a move goes through.