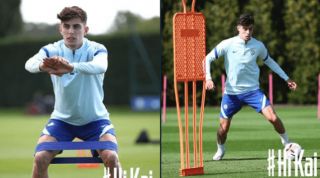 They’re the photos that all Chelsea fans have surely waited to see.

The 21-year-old was snapped when doing resistance band work as well as some work with the ball.

Frank Lampard’s Chelsea side can now boast one of the most exciting attacking line-ups in the Premier League after Havertz’s capture, and the pressure is likely to be on the Blues to hit the ground running at the start of the season.