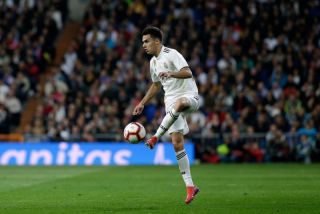 Reguilon, 23, has emerged as a top target for Ole Gunnar Solskjaer since his side suffered a crushing defeat to eventual winners Sevilla in last season’s Europa League semi-final.

The young full-back has enjoyed a superb rise in European football after he spent last campaign out on-loan with Spanish side Sevilla.

The Spaniard put in some seriously impressive displays last season after featuring in 38 matches in all competitions and racking up a total of eight goal contributions.

United, who appear to be in the market for a left-back to provide competition for regular Luke Shaw have reportedly targeted Real Madrid’s attacking full-back Reguilon, as per Manchester Evening News.

According to leading journalist Fabrizio Romano, the Reds have been offered the talented defender and fans will now be forced to wait to see the result of Madrid’s offer.

Reguilon has been offered to Man Utd. Let’s see ??

https://platform.twitter.com/widgets.js
It is understood that the 23-year-old full-back could be available for as little as €30m if United are able to agree to Zidane’s transfer demands, as per ABC.