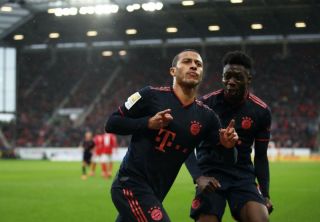 Bayern Munich midfielder Thiago Alcantara has made a fresh statement regarding his future amid increasing speculation he could leave the Allianz Arena for either Liverpool or Manchester United.

Thiago, 29, has emerged as one of this summer’s most sought after talents after the elite midfielder helped German giants Bayern Munich win their sixth Champions League trophy earlier this year after beating Neymar’s Paris-Saint Germain 1-0.

The Spanish international joined Bayern Munich from Barcelona in 2013 for a reported fee of £22.5m, as per TransferMarkt and has since gone on to become one of Europe’s most talented and experienced midfielder.

Thiago’s future was cast into doubt earlier this summer after it was reported by Bild that Bayern Munich CEO Karl-Heinz Rummenigge said the midfielder was looking for a new challenge which prompted speculation that Premier League rivals Liverpool and United could be in the hunt for his services.

However, despite the intensifying speculation that Thiago remains a top target for the Premier League duo, the midfielder has come out and addressed the links.

Speaking ahead of his country’s Nations League match against Ukraine tomorrow night, as quoted by Metro, Thiago said: “I have not said at any time that I am leaving. Every year you put me in a different team.

“I am on the sidelines, my future is tomorrow’s game right now. I neither care nor am I interested in what I know I talked.”