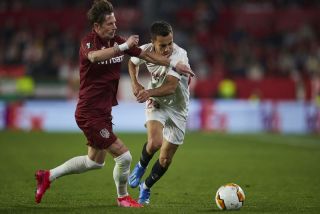 Real Madrid left-back Sergio Reguilon has reportedly been offered to Manchester United who are currently considering the highly-rated attacking defender as an ‘option’.

Reguilon, 23, has been one of Europe’s best break-out talents to emerge from last season after the talented full-back enjoyed a superb campaign after he helped on-loan side Sevilla lift the Europa League for a record sixth time.

The exciting Spaniard is widely regarded as one of the best left-backs in Europe which has prompted speculation United boss Ole Gunnar Solskjaer could be tempted into making a summer move for him.

United could do with reinforcing their full-back options after the side were left thread-bare at the end of last season after regular Luke Shaw picked up a season-ending injury and back-up full-back Diego Dalot fell out-of-favour with Solskjaer.

According to leading journalist Fabrizio Romano, Real Madrid have offered the 23-year-old to United and the Red’s hierarchy are considering him as an ‘option’.

Romano goes onto mention that La Liga side Sevilla, who Reguilon spent last season with have also asked to retain the defender for the 2020-21 campaign.

Sergio Reguilón has been offered to Man United. The board and Ole are considering him as an ‘option’. They’re gonna decide soon. Also Sevilla have asked to have him back on loan from Real Madrid. The race is still on [also for other clubs]. ? #MUFC #RealMadrid #transfers