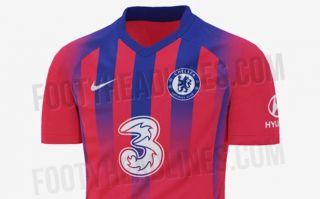 Crystal Palace have responded to the release of Chelsea’s new third kit today…which will no doubt have looked kind of familiar.

The Blues’ latest strip from Nike is not going down at all well as many of the club’s fans have tweeted about how much they hate it, and part of that reaction will surely be down to the resemblance between this shirt and that of their London rivals Palace.

The Eagles themselves have now mocked Chelsea over the kit with a tweet that’s gone viral this morning, as they simply sent out the message #ItsNotThoughIsIt – presumably in response to the official Chelsea account tweeting #ItsAChelseaThing…

Chelsea usually wear black, white or yellow away from home, and it’s very rare to see so much red on a kit for the west London giants.

Quite why they went for this design is not entirely clear, though they seem to suggest it’s based on a shoe from the 1990s – another thing that’s unlikely to impress their supporters.