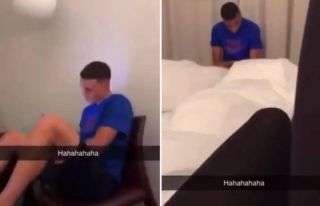 Manchester United and Manchester City stars Mason Greenwood and Phil Foden have lost their places in the England squad after their actions in a hotel room in Iceland.

The England duo are reported to have invited girls into their hotel room in breach of COVID-19 regulations, and will no longer be travelling with Gareth Southgate’s squad to Denmark.

The pair are seen as having left their secure England bubble by mixing with these girls, who posted an image of the players on Snap Chat, as seen in the picture above.

This is a huge embarrassment for two immensely talented young players, who have let themselves and their team-mates down when they had a chance to impress at international level.

Man Utd and City fans will be disappointed by the incident, and will just hope they now get the chance to come back stronger once the Premier League season gets going.