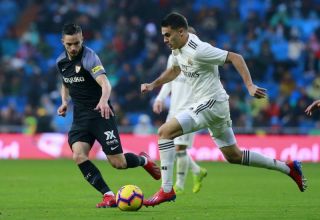 Manchester United are continuing to step up their efforts to sign Real Madrid’s Sergio Reguilon after it was reported by Di Marzio reporter Francesco Porzio that the Red’s remain in ‘constant’ talks with the player’s agent.

Reguilon, 23, has emerged as one of European’s hottest prospects after enjoying a successful campaign with on-loan side Sevilla who went onto become the 2019-20 Europa League winners.

The 23-year-old Spaniard put in some consistently good performances which included racking up a total of 32 La Liga appearances and being directly involved in six goals.

It was originally reported by Marca that the Reds are keen on bringing the highly-rated full-back to Old Trafford after Chelsea’s signing of Ben Chilwell ruled them out of the race for attacking full-back.

However, the latest in the ongoing Reguilon-saga comes from Francesco Porzio who claims that the United hierarchy are in ‘constant’ with the Spanish defender’s agent.

Constant talks with the agents of the player

Porzio’s claims come in light of the player removing his current club from his social media profiles.

The United faithful will be hopeful the Red’s can strike a deal with Real Madrid as the 23-year-old continues to impress both domestically and internationally with his latest contribution coming in Spain’s Nation League game against Ukraine last Sunday.