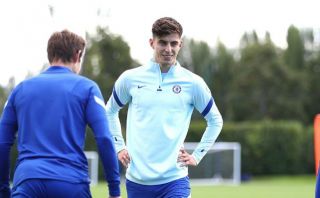 Chelsea manager Frank Lampard has explained how “overwhelmed” he’s been by the immense attitude shown by new signing Kai Havertz.

The Germany international recently joined the Blues from Bayer Leverkusen in what looks like being one of many exciting moves in the transfer market by the club this summer.

Havertz has shown himself to be a top talent in his time in the Bundesliga, and Chelsea fans will no doubt be excited to see what he can do alongside fellow new-boys Timo Werner, Hakim Ziyech, Ben Chilwell and Thiago Silva at Stamford Bridge.

As well as being a gifted attacking player, Lampard has spoken out on how impressed he’s been with the attitude he’s shown since joining Chelsea, which will also excite the club’s fans.

Speaking to Chelsea’s official site, Lampard said: “On his personality, I have been absolutely overwhelmed with how humble and down to earth he is, and how well he wants to do here, and how he is very excited with the challenge. He wants to come here and be a top player for Chelsea, and really prove his talents on this stage.

“That to me has been one of the most exciting things, not just to be excited about him arriving as a top talent, but to see his mentality as he has come in. That gives a really good feeling about how his career is going to be at Chelsea.”

Chelsea start the new Premier League season away to Brighton on Monday night and will hope it can be the start of a memorable campaign after a big summer of investment.