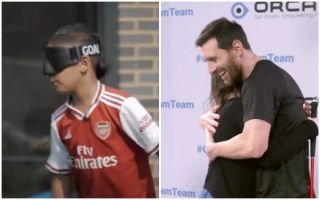 Barcelona superstar Lionel Messi has shown his class with a donated gift to a blind Arsenal fan.

The Argentine has teamed up with Israeli company OrCam to help pay for these expensive high-tech glasses, which can cost as much as £4,200 each.

Many visually impaired people won’t be able to afford the item, but Messi has done his bit to help one Gooner by giving a pair away as a gift to him.

Mikey, 10, from Enfield, was given the special glasses by Messi, and the Sun claim the 33-year-old plans to continue making similar donations of this kind.

Speaking about his role in helping blind children, Messi said: “The emotion was incredible. Meeting with this amazing group of people from around the world was truly a magical and inspiring moment.

“Witnessing each of the members of the “Dream Team” trying out the OrCam MyEye features, it was clear that this would be a life-changing device for each of them.

‘I am proud to be an OrCam Ambassador to truly make a difference for so many.”

Messi’s transfer situation may have dominated headlines this summer, but the Barca forward has shown he’s more than just a great player, he’s a true gent away from the pitch too.