The ex-England international clearly believes that the Brazilian is the kind of defender that Arsenal have been crying out for, hailing the ace’s ‘aggressive’ tackling approach.

MORE: Arsenal fans will love this as Arteta explains why debut performance was so impressive

Thomas didn’t beat around the bush as he noted the centre-back’s shaky start in the 3-0 win against Fulham, but believes this afternoon’s display clearly showed ‘why Mikel Arteta wanted him’.

The most notable positive sign that Thomas pinpointed was that the 22-year-old ‘doesn’t look like he’s going to be bullied’.

The thorn in Arsenal’s backline over the last few years has been a lack of aggression and physicality from defenders, with the lack of a commanding presence proving to be costly to the side’s success.

Gabriel even managed to get on the scoresheet in his debut for the north London outfit with a bullet header, something that no doubt solidified the ace as Arsenal’s Man of the Match.

Here’s what Thomas had to say on Gabriel’s display in his first competitive outing for the Gunners:

“Gabriel started off slightly shaky but after the first 10 minutes he found his feet and you can see why Mikel Arteta wanted him.

“First and foremost he is aggressive in the tackle, likes to win aerial duels and doesn’t look like he’s going to be bullied, knows when to play it simple and looks forward with his passes.

“It was a big call putting him straight in at the centre of the back 3 given he hasn’t played competitively for a while due to the French season being cut short, but he looked comfortable and hopefully he continues to grow as a player. He took his goal well and got a deserved MOTM award.” 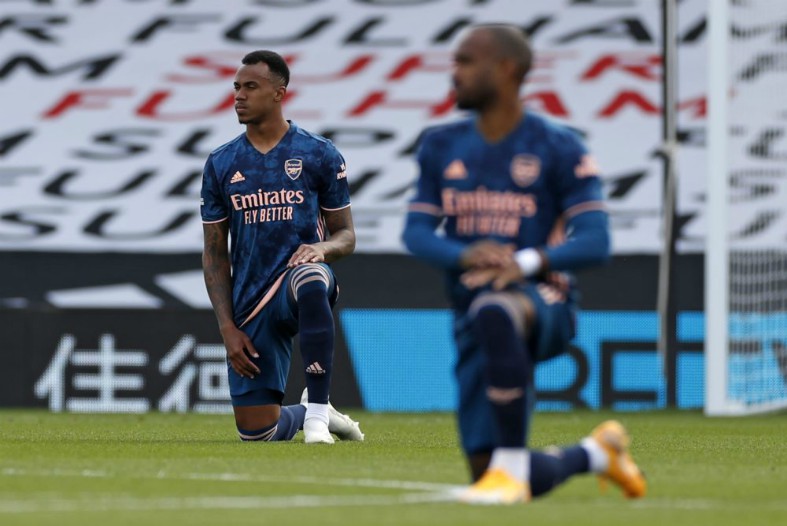 Gabriel Magalhaes had a strong debut for Arsenal

Thomas also had his say on the potential of Gabriel being a real ‘steal’ for the Gunners compared to some of the other players on the market.

“Given the way clubs are spending in today’s day and age I think Gabriel’s come at an unbelievable bargain price.

“You see crazy numbers for players being quoted these days e.g Kalidou Koulibaly £70-80 million, are you sure?

“If he keeps improving his game and playing like today then Arsenal have got a real steal there and you can see why other teams were in for him.”

Video: Liverpool may have dodged a bullet by avoiding defensive target after he picks up two stupid yellows in a minute

Arsenal exits: Four players who look set to leave this summer with talks at various stages

Gabriel turned in a magnificent debut performance, Arteta will be hoping that the South American can build on this performance as the side finally appear to be steadying their defensive line after years of lacklustre showings and tomfoolery at the back.

Gabriel wasn’t Arsenal’s only impressive debutant, as former Chelsea star Willian was credited with all three assists – even if the first of those was a little generous.

Arsenal have certainly had a strong transfer window so far, and it’s little wonder Gabriel’s Premier League debut has gone down well.