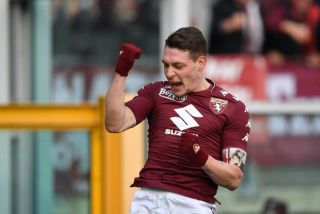 Torino have reportedly rejected an audacious bid from Tottenham Hotspur for star-striker Andrew Belotti. Jose Mourinho has tried to tempt the prolific Italian to London by offering him the chance to join Spurs on loan initially with an option to buy for €50m.

Belotti, 26, is widely regarded as one of the most lethal strikers in Europe after enjoying a successful five years in Turin.

Arguably one of Belotti’s best campaigns came last season after he bagged 22 goals and four assists in 44 appearances in all competitions.

According to Di Marzio Jose Mourinho’s Spurs have recently tried to lure Belotti to The Tottenham Hotspur Stadium by offering him the chance to initially join on loan with an option to buy for €50m.

Spurs’ attempt is believed to have been rejected by the Torino hierarchy as they would prefer for their main-man to leave for cash upfront.

Torino are believed to be reluctant to allow Spurs take Belotti on loan and would prefer the Londoners stump up more cash to buy outright straightaway.

The report does not state whether or not Spurs are likely to launch a second bid, but with Mourinho stating he is confident the club will land a new striker before the transfer window shuts, as per Sky Sports Spurs fans could see some late summer additions.