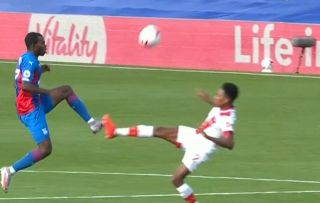 Every team has had some kind of gripe with VAR since it’s introduction in the Premier League, but it was madness to have different people making different decisions.

It was obvious that the officials watching the replay were terrified of overruling the ref on the pitch if it was any kind of judgement call, while the video footage available at the side of the pitch wasn’t being used.

That looks set to change this season, and we have an example of a ref being allowed to watch his own decision back and make the right call:

It’s one of those examples where you can understand why he gave it at the time, but when you watch it back it’s obviously not a red card, and the system has actually worked well for once.

One out, one in: Tottenham eye reinforcement but exit touted first between duo April 23, 2020 10:34
Tottenham FC

Darren Bent lays into Spurs ace by claiming he’s too erratic and puts the team at risk September 25, 2019 13:47
Tottenham FC