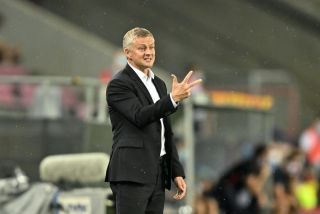 Manchester United manager Ole Gunnar Solskjaer has revealed that he told his side they need to be more clinical and dominant during half-time in yesterday’s pre-season friendly against Aston Villa.

The Reds Premier League campaign has been delayed by one week due to their participation in the latter stages of last season’s Europa League which was moved back further in the footballing calendar due to the ongoing COVID-19 pandemic.

The Reds eventually went onto lose the pre-season match against Villa 1-0 after an early goal from new-signing Ollie Watkins sealed the side’s fate.

However, in light of yesterday’s game, manager Solskjaer has revealed what he told his side at half-time, speaking live on MUTV as quoted by Manchester Evening News he said: “That’s what we said at half-time.

“Some great football at times, get into some fantastic positions, and maybe that’s the lack of sharpness, lack of lungs, maybe. Because it’s early doors but we need to be more clinical and then you go home happy.”

With continued speculation surrounding whether or not United can bring in number-one summer transfer target Jadon Sancho before the end of the window it remains unclear whether or not Solskjaer can add firepower to his side’s front-line.

However, despite United’s lack of transfer activity, the Norwegian will be hopeful his young Reds can kick-on and bounce back from yesterday’s disappointing result as he prepares the side for their domestic opener against Roy Hodgson’s Crystal Palace on September 19.