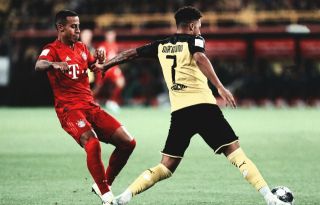 Sancho, 20, has been United’s number-one summer transfer target after emerging as one of Europe’s hottest prospects in light of enjoying a thoroughly impressive campaign last season.

The exciting Englishman was directly involved in a monumental 40 goals in 44 appearances in all competitions last time out for Dortmund and has since go on to shoot right to the very top of United’s summer wish-list.

However, according to a recent report from Manchester Evening News the Reds are refusing to pay the whopping £108m demanded from Borussia Dortmund for their elite winger’s services.

MEN claim that it is United’s preference to agree to a structured deal comprising of instalments and add-ons, something which Dortmund remain extremely unlikely to agree to.

The report goes onto state that the United hierarchy are growing increasingly frustrated by the slow pace negotiations are taking given the involvement of third party intermediaries but does claim the Reds have a list of alternative targets they plan to pursue in the event a move for Sancho fails to materialise.