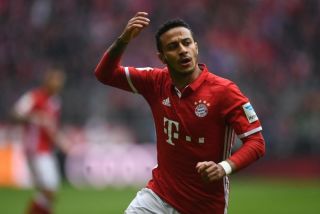 READ MORE: Man United adamant that they will not meet Dortmund’s £108m demand for Jadon Sancho

Thiago, 29, is arguably one of the world’s best midfielders and has cemented himself as one of football’s greatest talents after enjoying successful spells at both Barcelona and Bayern Munich as well as enjoying a glittering international career with Spain.

The elite midfielder joined Bayern Munich in 2013 in a move costing £22.5m, as per TransferMarkt and has since gone onto feature in 235 matches in all competitions and be directly involved in 68 goals for The Bavarians.

Thiago’s seven year spell in Munich has seen his contributions help guide his side to a whopping 17 major trophies including one Champions League trophy and seven Bundesliga titles.

It has been widely speculated throughout the summer that Premier League royalty United and Liverpool are battling it out for the talented playmaker’s signature, as per Sky Sports.

However, according to a recent report from Manchester Evening News, United have ‘no intention’ of making an official move for the Spanish midfielder, despite Bayern Munich’s president Uli Hoeness recently claiming the midfielder already has an agreement in place with either United or Liverpool, as per Sport.de (via Sports Witness).

MEN’s report claims that United officials are convinced the club’s name is being thrown into the mix in order to push Liverpool into making a formal approach for Thiago.