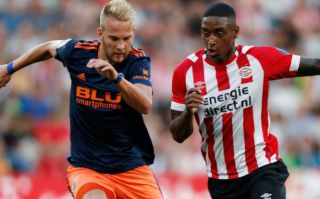 The ‘environment’ of Valencia midfielder Uros Racic have supposedly confirmed there is transfer interest from Manchester United this summer.

The 22-year-old looks a promising talent and could do a job for Man Utd, though this link is a somewhat surprising one due to the Red Devils already having plenty of options in the middle of the park.

Bruno Fernandes moved to Old Trafford back in January, and Donny van de Beek has also been brought in from Ajax this summer, leaving little room for further additions in that department.

Still, according to the reliable Hector Gomez in the tweet below, the representatives of Racic have confirmed United are interested in signing the Serbia international, though it’s not yet clear if they will firm that interest up with a concrete offer for the player…

Racic looks to have a bright future in the game so could well be worth investing in for United, though one imagines they should consider prioritising other areas of their squad.

Ole Gunnar Solskjaer’s defence still looks like a weak area, and some might also feel they could do with at least one more top attacking player up front.