The Premier League have released an official statement urging the government to stick to the agreed date of October 1st for the phased return of fans to football stadiums.

The 2019/20 season was suspended back in March due to the outbreak of COVID-19 in the UK, and though the campaign got going again in June and was thankfully completed without trouble, matches have been played behind closed doors ever since.

While the safety of the public has to be a priority, one imagines that it could be possible to have small crowds attending games again soon, provided social distancing measures are in place and a high standard of hygiene is maintained.

Small crowds have returned in some countries, with fans able to get into games in Poland and the Czech Republic in recent times, while the new seasons in France and Holland have also been able to welcome in a reduced number of supporters. 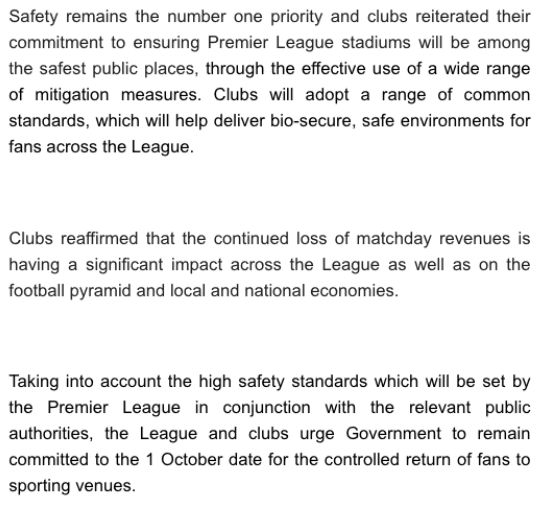 Football clubs will no doubt be feeling the economic impacts of the coronavirus pandemic, and it would also be a morale boost for the nation if something of an atmosphere could return to games.

The return of the Premier League has been highly enjoyable, but it will never be quite the same in empty stadiums and with fake crowd noise.