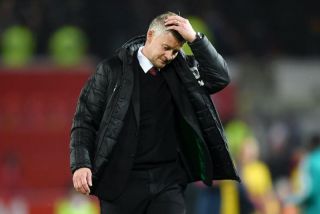 Bielsa, 65, has become a cult hero at Leeds United after joining the club two years ago and successfully guiding them back to the Premier League for the first time in 16 years.

The brand of football under Bielsa has been totally transformed to the point that Leeds United have scored seven times in their opening two Premier League games with three coming against champions Liverpool at Anfield on the first weekend.

The Argentinian footballing mastermind is widely regarded as one of the most obsessed managers in the game. Bielsa is known for his ability to tactically outwit his opponents whilst seamlessly setting his sides up to play some irresistible attacking football.

On the opposite end of the scale is Leeds’ arch-rivals Man United who suffered a crushing 3-1 opening Premier League defeat to Crystal Palace yesterday.

Offering very little in attack and with a fragile and error prone defence Ole Gunnar Solskjaer’s Reds look further away from winning a Premier League now than they did after Sir Alex Ferguson retired seven years ago.

Speaking about the Leeds United boss live on TalkSPORT Cascarino believes the 65-year-old could be just the right man to turn United’s fortunes around, he said: “I think Solskjaer got a lot wrong yesterday because he should have made changes a lot earlier.

“There was no urgency.

“I was watching Leeds in the earlier game, and then watching Man United at 5:30pm, and I was thinking, ‘maybe United do need something different’.

“Not players, but maybe they need Bielsa.

“I’m looking at Man United and thinking they do the exact opposite of what Leeds do – they don’t take risks.

“When Ole gets it right – and he has got it right in a good few games – they are offensive and attacking and dangerous from many parts of the team.

“But yesterday they were laboured, sloppy and never had anything which represents Manchester United.”