Football goes through phases where one particular offence becomes a major focus for referees, so it’s common to see a lot of decisions being made in a short period of time before that focus shifts elsewhere.

Notable examples would be players grappling at corners or clamping down on two footed tackles, but it’s worrying to see that giving penalties for handballs is starting to overshadow Premier League games.

The law is set up for disaster because it’s explicitly implied that offences will be treated differently when it comes to creating a goal, while VAR is displaying a worrying trend of getting refs to review situations that are judgement calls.

You can convince yourself to change your mind at just about anything if you think about it for long enough, and seeing the penalty at Old Trafford and the red card against Chelsea do make you worry about how things could turn out this season.

Both situations were judgement calls and you can make arguments for the decisions going either way, so that tells you that VAR should not be getting involved and the refs cannot start changing their mind when it’s not clear and obvious that a mistake was made.

The penalty decision for Crystal Palace was remarkable because not only was their insufficient evidence to overturn the call, but we asked former Premier League referee Keith Hackett for his opinion and he’s completely confident that a penalty was the wrong decision.

It’s also very unhelpful when pundits are quoting out of date laws about it being a case of “ball to hand”, while fans in Scotland have also been treated to Michael Stewart’s infamous “biomechanics of the body” explanations too.

The most important thing for a fan is understanding the laws and how this affects potential decisions during matches, so it’s been interesting to get further clarity on the handball law from Keith Hackett.

He cites the example of the penalties awarded against Man United and Spurs at the weekend where incorrect decisions were made, while we also got his views on the penalty awarded against Leeds on the opening day which was proved to be wrong too. 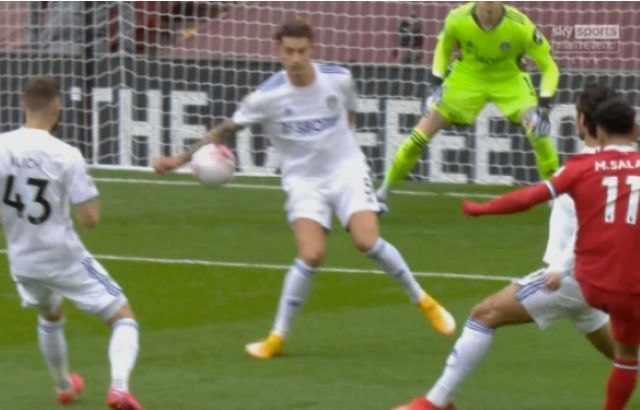 If you want some heavier reading on the topic then it can be found here on the IFAB website, but here’s some of the key points about the handball law.

For the purposes of determining handball offences, the upper boundary of the arm is in line with the bottom of the armpit. As a result, it’s an offence if a player does the following:

It’s important to note that it’s not an offence if the ball hits someone on the hand/arm:

It’s for these reasons that he feels those decisions were incorrect, but it also shows how many intricacies there are to the handball law.

What it does show is that a referee needs to be clear that a player has deliberately handled the ball or gained an advantage by making themselves unnaturally bigger before handling it, so hopefully we don’t see this continue for much longer.

Fans and players will always tell you that they just want to see consistency from the officials, but just being consistently wrong all the time doesn’t help anyone.

Any reasonable person will understand that mistakes will be made and football is so fast that there will be situations where a ref simply hasn’t seen enough to be confident that an offence has been committed, so that’s where VAR needs to step in to fix obvious errors rather than trying to micromanage the game.

The biggest danger is that we’ll see teams deploy a tactic of hammering the ball at oppositions players in the box and hoping it hits an arm somewhere along the way, so it’s vitally important that the officials get on top of this quickly and that VAR only steps in when something egregious has happened.