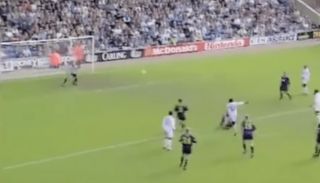 It was one of the best goals of the 1995 Premier League season and, even now, 25 years to the day, Tony Yeboah’s strike against Wimbledon ranks amongst the very best.

The Ghanaian had burst onto the scene with Leeds and had already scored a goal of the season contender with a wonderful dipping volley against Liverpool, but his strike at Selhurst Park on September 23, 1995, is arguably the greater goal.

Receiving the ball on his chest, he allows the ball to drop onto his left thigh before switching to his right foot and unleashing a ferocious strike into the top corner.

Watch it in all its glory again below.