Liverpool midfielder Curtis Jones is earning big praise from fans as they react to his performance against Lincoln on Twitter.

The 19-year-old is yet to fully establish himself as a regular for the Liverpool first-team, but he announced himself with a memorable solo goal against Everton in the FA Cup last season.

Since then, Jones has continued to impress when he’s managed to get on the pitch, and he had another eye-catching performance for Liverpool as they thrashed Lincoln City 7-2 in the Carabao Cup this evening.

The teenager scored twice, with both goals well-taken efforts to show once again why he’s such a big prospect and should have a very bright future at Anfield.

Unsurprisingly, it seems loads of LFC supporters are taking notice of Jones’ huge potential as many praise him as a “special talent” and use similar superlatives after watching him in action this evening.

Curtis Jones is a special talent??

Great performance tonight. Some players showing they still wanna he there, Shaq and Grujic especially. Curtis Jones is a special talent, nice to see Minamino settled in now ???? #LFC

Curtis Jones needs to be talked about more! Man of the match performance tonight, and never looks out of place in the 1st team. Going to be a top player for us! ? @curtisjr_10 #LFC #YNWA

The way Curtis Jones turns , cuts outside and tries to take a shot as soon as he's in that wide golden region is sort of his Trademark.

Always looking to create and maintain the pace of the game .
I get the reason why Klopp rates him so highly.

Curtis Jones is the real deal. Just 19 and doesn't look out of place with the senior squad at all. I'd say he's easily ahead of both Milner and Ox in the pecking order at the moment.

That Curtis Jones kid looks like a serious baller 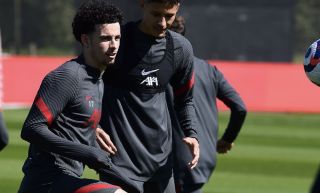