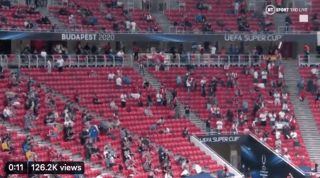 The return of supporters at football stadiums across the world can’t come soon enough.

It’s been six long months since fans were able to watch the match live, and provide some atmosphere at the grounds as a result.

From a financial and emotional perspective, the sooner things return to normal, the better.

At the UEFA Super Cup final on Thursday evening, 20,000 socially distanced supporters wearing masks were allowed in as part of a test by the governing body.

What a beautiful sight it was too.

Social distance measures are in place in Budapest ? pic.twitter.com/JxMw6ue84y