While those running Barcelona have done a fine job of displaying their incompetence recently, things have moved to a new level as they’ve demonstrated a total lack of class over Luis Suarez’s departure from the club.

There are plenty of reasons not to like the striker – the biting, racism and general antics have always made him a player that opposing fans will despise, but he’s also been a phenomenal striker for Barca.

198 goals in 283 shows how prolific he’s been for the club, but his pressing and unselfish play has also been a major reason for Barca’s success over the years.

It feels like he’s been forced out of the club this summer and he’s now officially an Atletico Madrid player, but it appears that the fallout from this is just beginning from the Barcelona side.

It started with an emotional goodbye on Instagram that Lionel Messi followed up on, and his words were supportive of his friend yet damning on the club:

Messi says a lot in his farewell message but the most noticeable comments came here:

“It will be strange to see you with another shirt and much more to face you. You deserved to be fired as what you are: one of the most important players in the club’s history, achieving important things both as a group and individually. And not to get kicked out like they did. But the truth is that at this point nothing surprises me.”

Clearly Messi no longer cares about upsetting those in charge and that could come to a head if he leaves next summer, but he’s not the only player to get involved here.

Former Barca greats Neymar and Dani Alves also got involved by commenting on Suarez’s post, and they are clearly furious with the club too: 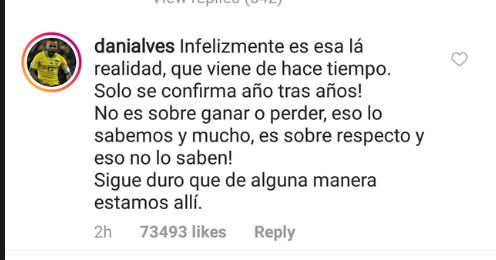 Neymar went for a fairly subtle “It’s incredible how they do things” complete with a facepalm emoji, but Dani Alves went a bit further.

The rough translation of Alves’ words are:

“Unfortunately, this is a fact that arose long ago. To be confirmed year after year. It’s not about winning or losing, we know a lot, it’s about respect and they know nothing about it.”

It really shows how unhappy some major players are with the club and it really is an awful look for those in charge. Perhaps they felt emboldened after Lionel Messi had to stay, but forcing Luis Suarez out has just provoked another wave of criticism that could be tough to bounce back from.