There’s little doubt that the implementation of the handball laws have dominated the start to the Premier League season, but the scenes between Spurs and Newcastle today mean we’ve probably reached a tipping point.

There will be added anger from Spurs because they’ve drawn a game that should’ve been dead and buried, but the timing and the importance of the penalty call will make this a much bigger issue.

There’s zero doubt that the ball does hit Eric Dier on the arm, but he’s in mid air with his back turned and his arm isn’t really outstretched, so it’s clear to see why there’s so much anger around the call: 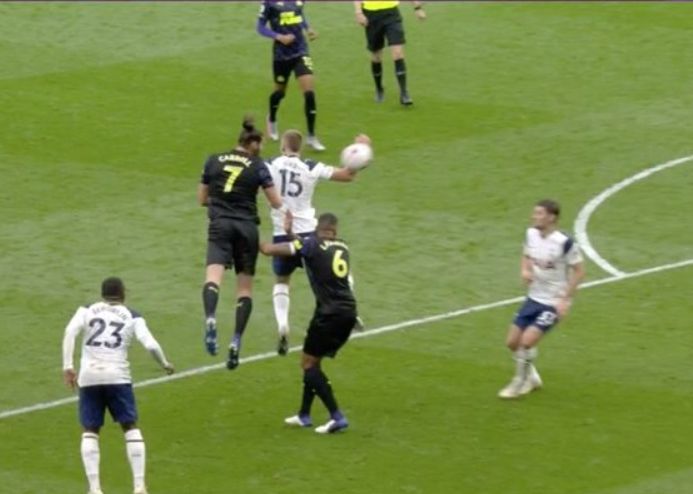 It’s always telling when you hear what the managers have to say, and Steve Bruce made it clear in his post match interview that he completely understands why Jose Mourinho is unhappy with the decision.

To get a professional opinion on the matter I spoke to former Premier League referee Mark Halsey to get his views on the decision, and this actually highlights a serious issue here.

He didn’t blame the referee for making the decision because he’s simply following orders from above, but he was clear that the interpretation of the laws we are seeing on the pitch don’t tie in with the written laws of the game.

You can read the full handball laws on the IFAB website, but this is the key law that applies in this case:

Speaking about the decision Halsey said:

“The problem I have is that it’s not a handball. Dier has his back to the ball and his arms are in a natural position – you need to use your arms to elevate yourself to challenge for the ball in the air”

He added that “I’m not blaming the ref but the way they are interpreting the law is not what’s written in the IFAB laws of the game.”

He confirmed to me that the issue has arisen from someone in charge deciding that the laws should be implemented in this way, and we’ve reached a point where something will need to be done.

Things only change in football when a major decision goes against a big team and it ruins the reputation of a league on the biggest stage, so if this doesn’t change things then you do wonder what will actually need to happen to act as that catalyst.