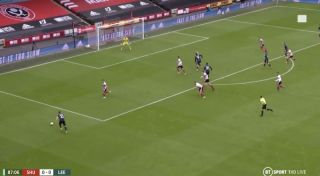 Leeds United midfielder Jack Harrison broke free on the left flank and whipped in a pinpoint delivery which Bamford gladly took advantage of.

Leeds United’s latest win sees them remain in the Premier League’s top-half with a home tie against Manchester City on October 3 next up for Bielsa’s men.

Patrick Bamford at the death! ?

The Leeds striker rises to nod his side into a late Yorkshire derby lead!

Jack Harrison celebrates before the ball even hits the net! ? pic.twitter.com/teYukyJ07j

(Video) Alioski makes up for earlier error by setting Bamford up as Leeds United take lead vs Spurs May 8 2021, 13:20
Tottenham FC

‘Difficult for him to shine’ – Bielsa attempts to protect Leeds flop who had just 15 touches in an hour against Brighton May 3 2021, 15:11
Leeds United FC