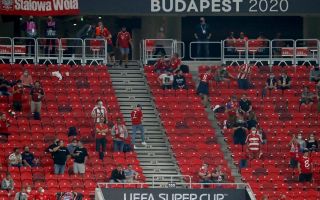 UEFA have reportedly had a lot of success with the measures put in place in the recent Super Cup clash between Bayern Munich and Sevilla.

A reduced crowd were able to attend the recent match in Budapest, and The Athletic report that this could persuade UEFA to be able to let some fans in for upcoming games in the Nations League.

The report explains that temperature checks and measures to enforce mask wearing went well, and even resulted in a small number of fans not being allowed in to the game.

This cautious approach could well mean that some fans at games in the near future is realistic, and it’s encouraging to hear that the upcoming international matches could be another opportunity to trial this.

Fans have been back at games in some leagues such as France and Holland recently, but a decision to allow fans back in Premier League games by October was recently pushed back by the government.

As we’ve written about here, it seems slightly unfair that an outdoor activity with good social distancing is being prevented from taking place while indoor venues such as pubs and restaurants remain open and crowded all across the country.