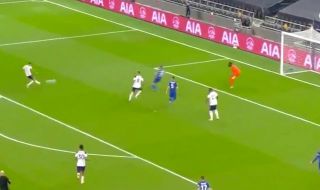 Chelsea have had their troubles between the posts in recent times, but Edouard Mendy could seemingly be the solution that they were looking for.

Kepa Arrizabalaga has made the headlines for the wrong reasons dating back to last season, and it’s fair to say that he struggled to fully convince Frank Lampard.

SEE MORE: Video – “Filling me with more confidence” – These Chelsea fans already prefer Mendy to Kepa after a sharp double save vs Spurs

He was dealt a major blow this month with the club’s decision to sign another goalkeeper in Mendy, and the shot-stopper was given a chance to impress in midweek in the Carabao Cup clash with Tottenham.

Impress he did as he produced a fine stop in the first half, and he followed it up with another important save after the break as seen in the video below.

Sergio Reguilon was found in space and with time in the box and appeared set to find an equaliser for Tottenham, but Chelsea’s new goalkeeper was on hand to deny him.

Unfortunately for the Blues though they couldn’t hold out for a clean sheet with Erik Lamela bagging a goal in the 83rd minute to draw the hosts level to set up a tense finish.

WHAT A SAVE FROM E. MENDY TO DENY TOTTENHAM & KEEP CHELSEA IN THE LEAD pic.twitter.com/CGI9sqUiaH