Sergino Dest has landed in Barcelona as he moves closer to securing a move to join the Catalan giants from Ajax in a touted move worth around €25m.

The 19-year-old has emerged as a real talent after impressing for the Dutch giants, and his form has led to interest from elsewhere.

As per Sport, it’s suggested that Barcelona will snap up the talented youngster for around €25m, and perhaps the €30m generated from Nelson Semedo’s sale will cover the cost of the deal.

The video below shows him arriving in Barcelona and so it would appear as though he will now go through the necessary formalities to complete a move, with his medical expected to take place on Wednesday.

However, the report above does stress that the deal isn’t yet completed as the two clubs still have to reach a full agreement, but it’s suggested that Barca will splash out around €25m as they hope to now bring in a long-term solution at right-back with Ronald Koeman continuing to stamp his mark on the squad after being appointed as coach earlier this summer. 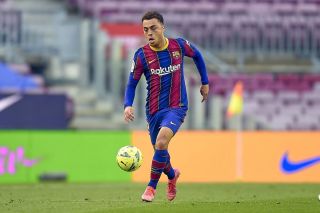 Arsenal, Bayern and Juventus all interested in Barcelona youngster May 30 2021, 17:29
Arsenal FC