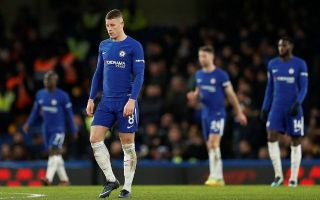 Aston Villa have announced the signing of Ross Barkley from Chelsea on a season-long loan deal.

Villa have experienced a wonderful start to the season, winning both of their Premier League games so far and also their two Carabao Cup ties to date.

Dean Smith has described the recruitment of Barkley for the season as a ‘real coup’ for the Villains, with the 26-year-old a very experienced central midfield option for the West Midlands outfit to call on.

This is undoubtedly a solid opportunity for Barkley, who has sealed a loan exit after slipping down the pecking order at Chelsea.

Barkley has come off the bench twice for Chelsea in the Premier League this season, whilst also playing and scoring in the Carabao Cup tie against Barnsley.

Barkley started 19 of his 31 appearances across all competitions last season, contributing five goals and five assists for the Blues.

It’s not surprising to see that a loan has been sanctioned, as Lampard’s started to deploy a 4-2-2-2 formation this season, as opposed to the 4-3-3 that granted the use of another central midfielder.

Even if Lampard opts for a 4-2-3-1 formation, like he did against Spurs and West Brom, Barkley would have to be play backup to marquee signing Kai Havertz, whose natural position is as a No.10.