The Houssem Aouar Arsenal transfer saga may finally be coming to an end, according to breaking reports this afternoon.

The Frenchman has long been linked with a move from Lyon to Arsenal, while other big names such as Manchester City and Juventus have also been mentioned as suitors.

More recently, however, it has looked like the Aouar Arsenal transfer was the most likely outcome, and it now seems he’s edging closer to completing his switch to the Emirates Stadium.

See below as journalist Sam Hart claims Aouar is in London for his medical with Arsenal, and the deal now looks set to be completed by Friday… 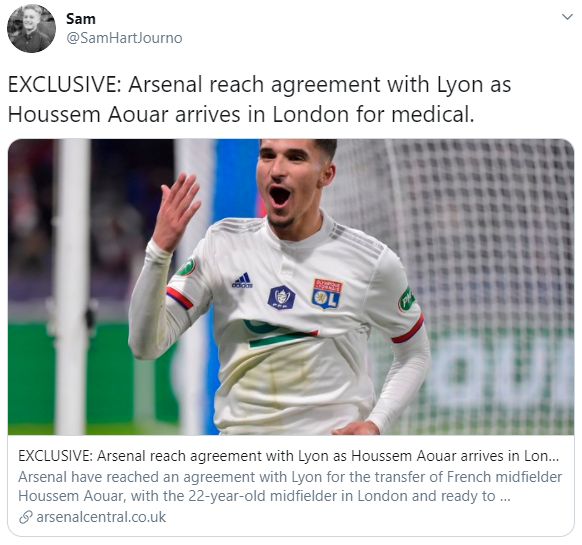 Arsenal badly need a signing of this type, so fans will hope this is finally the breakthrough they’ve been waiting for on the 22-year-old.

Arsenal look set to sell Lucas Torreira to Atletico Madrid and could also offload Matteo Guendouzi, so it makes sense to strengthen with this top signing in the middle of the park.

Mikel Arteta has done fine work since taking over as Arsenal manager, and Aouar could be the final piece of the jigsaw puzzle after also bringing in Willian and Gabriel Magalhaes this summer.