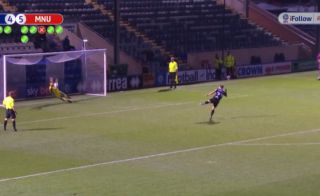 There may be some doubts over how seriously clubs take the EFL Trophy during the early stages, but it does look like Man United’s U21 side have more than enough to deal with some of the senior outfits they are coming up against.

They already demolished Salford in their opening game, while they managed to pick up a couple of points last night thanks to a draw and then winning the penalty shootout against Rochdale.

United’s goalkeeping department is already impressive with David de Gea and Dean Henderson fighting it out for the number one spot, while they’ve also got an experienced Argentine international in Sergio Romero as the third choice.

Even if disaster struck they still have a perfectly competent keeper in Lee Grant, so young players like Ondrej Mastny will probably never get a chance to break through.

The best he can do is impress when he gets chances, so being a penalty stopping hero is always a good thing to have on the resume.

His first stop came during the actual game, but it’s a pretty poor effort from the taker:

He then followed this up with two more stops in the shootout, including the decisive stop in sudden death to win the extra point: