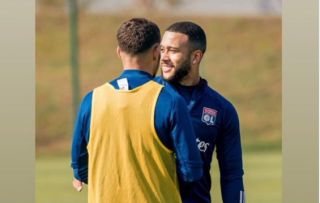 Lyon forward Memphis Depay may have raised one or two eyebrows with a post on social media involving Arsenal transfer target Houssem Aouar.

The Gunners have been linked strongly with Aouar by Sky Sports and others, with the Frenchman looking like the kind of talent Lyon could struggle to hold onto.

The Ligue 1 side tend to sell their best players most years, and Depay has now been spotted posting this message to Aouar with a broken heart emoji…

What’s with the broken heart ? pic.twitter.com/yNXh9RI2DR

Of course, if this is a goodbye post of some kind, it might also be because Depay is set to leave Lyon for Barcelona.

As tweeted by Fabrizio Romano recently, the Netherlands international is a target for Barca boss Ronald Koeman…

Ronald Koeman: “Depay or Lautaro Martinez? I’m not ruling anything out…”. The real target for Barça is Memphis Depay. First bid ready to be submitted by weeks [€30m/add ons inc] – Koeman is trying to convince the board. Lautaro is going to stay at Inter. ?? #FCB #transfers

There is an alternative view, however, from ESPN’s Moises Llorens, that Barcelona don’t want to sign Depay due to the financial risk involved…

It might be reading too much into one social media post, but Arsenal fans could have reason to be excited here if this is indeed a little hint over Aouar’s future.

It’s increasingly common for transfer rumours to be fuelled by posts like this, so it will be interesting to see if it amounts to anything in the coming days.

Arsenal may have to wait until next summer to land key target as January approach expected to fail October 11, 2020 19:34
Arsenal FC

Arsenal missed out on their key target this summer because his brother/agent wanted €10m as a commission payment October 9, 2020 17:09
Arsenal FC