Liverpool have been calculated as being England’s biggest club, narrowly ahead of Manchester United.

These debates have raged on and on for decades now and will no doubt always continue, with some people unlikely to be convinced to change their minds, whatever the argument.

However, The Athletic have done a pretty good job here of working out a scoring system to come up with their answers.

See below as Liverpool are just ahead of Man Utd on points, with their tally bumped up thanks to the fact that they’ve won more Champions League titles than their rivals… 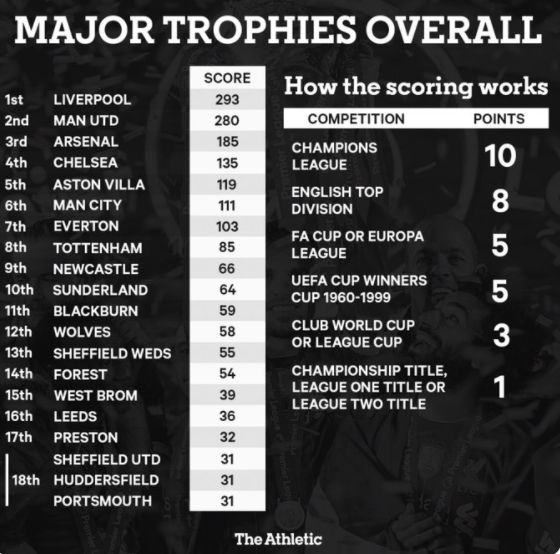 Ten points are given for winning the European Cup, of which Liverpool have six to their name, compared to United’s three.

Some will no doubt argue that league titles are actually harder to win than a knockout competition, but then it’s often the case that you have to beat the very best teams in the world in order to win the Champions League.

Arsenal are third, followed by Chelsea, while Aston Villa remain ahead of Manchester City due to their history, even if in the modern era there’s no doubt the two clubs are worlds apart.