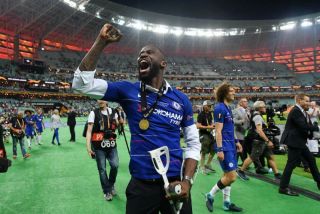 Chelsea defender Antonio Rudiger has been left out of Chelsea’s matchday squad to face Crystal Palace later on this afternoon with speculation mounting that the German could be set for a deadline day exit.

Rudiger, 27, joined Chelsea in 2017 from Italian side AS Roma in a move which cost the Blues £31.5m as per TransferMarkt and has since gone onto feature in 115 matches in all competitions for Frank Lampard’s Chelsea.

The pacey centre-back has fallen out-of-favour at Stamford Bridge in recent times with Lampard seemingly preferring a defensive partnership of Andreas Christensen and Kurt Zouma.

According to leading journalist David Ornstein, the German defender could be set for a transfer deadline day move after he has left out of his side’s matchday squad to face Crystal Palace later this afternoon.

? Details on absence, dilemmas, decisions for both sides + destinations

It is not yet known if Chelsea will seek a replacement however, having spent upwards of £200m already, it is unlikely the Blues’ spending spree will continue.

However, with just three days left in this summer’s transfer window with Monday’s 11pm deadline fast approaching, if Chelsea are to offload Rudiger they will need to act quickly.