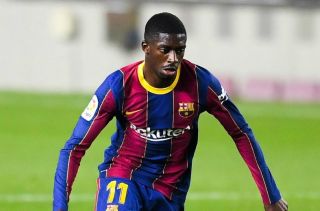 As Barcelona prepare to face Sevilla on Sunday, one of their most expensive ever signings could be missing from the starting line-up again.

Ousmane Dembele has been a substitute in both of Barca’s La Liga games in this 2020/21 season so far, and it’s highly likely he will be so again.

That’s despite him costing the club over €100m when they acquired him from Borussia Dortmund.

Whilst it’s true that he’s only recently returned from injury after a long lay off, playing second fiddle is hardly likely to be appealing to the French World Cup winner.

Man United have recently been linked with taking Dembele to Old Trafford, and whilst any deal appeared to have cooled, it could be reignited again after Barcelona manager, Ronald Koeman, admitted that Ansu Fati is ahead of Dembele in the pecking order.

“We have a lot of competition in attack and a lot of quality,” he said to MARCA, cited by Football Espana.

“Dembele can play on both sides, but we have many players to fit in.

“Ansu is ahead of Dembele. If a player is unhappy, he can talk to me. But he has not spoken to me and I will be counting on him.”

The 17-year-old Fati is on fire at the moment, scoring at will and proving to be a handful for every defence.

Given how well stocked Barca are for attackers at this moment too, a move for Dembele might just be the best thing all round.

Man United need to be ready to pounce if that’s the case.