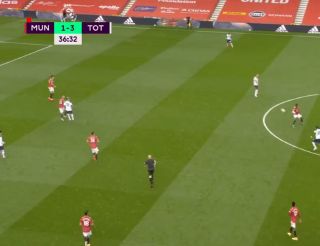 It’s amazing to think that Man United took an early lead in this game, but they have looked like an absolute shambles ever since.

Spurs have just gone 4-1 up and it’s an absolute masterclass in defensive disorganisation from United.

For some reason Luke Shaw has taken it upon himself to pop up in the libero role and leaves the entire left flank open, Harry Maguire ambles out and does nothing to stop the attack and then Shaw just runs away and leaves two men open in the box:

You would be furious if a schoolboy team came up with this, never mind Man United.