The France international is being talked up as a possible late target for the Red Devils, with the club certainly in need of a top wide player to strengthen their attack after a slow start to the season.

As reported by Fabrizio Romano, a loan deal for Dembele is being eyed up by Man Utd, but the complication could come from Barca favouring a permanent sale… 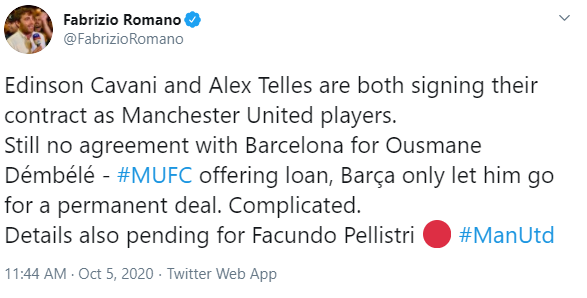 United need a good deadline day after being thrashed 6-1 by Tottenham yesterday, and Chadwick believes Dembele could be of some use to his old club.

The 39-year-old admitted, however, that he isn’t really a substitute for Borussia Dortmund’s Jadon Sancho.

“He (Dembele) had an incredible reputation as a youth player coming through, but probably hasn’t performed the way he would’ve liked at Barcelona,” Chadwick told CaughtOffside.

“If you had the choice between Dembele and Sancho, I think you’d choose Sancho every day, but it looks like that ship has sailed.

“Hopefully Dembele can come in and kick-start his career after a bit of a frustrating time at Barcelona.”