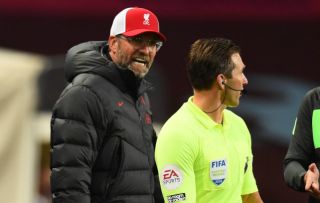 The Reds endured one of the worst results of their recent history as Villa absolutely hammered them with a memorable performance on what was generally a crazy day of Premier League football.

Earlier in the day, Manchester United were beaten 6-1 at home to Tottenham, but Liverpool conceding seven to Villa was even more of a shock.

One imagines this will end up being something of a one-off from the reigning champions, and Klopp seemed to slightly struggle to explain it afterwards.

As quoted by BBC Sport, the German tactician says his players simply lost the plot after the first goal, and gave Villa far too much space from that point onwards.

“Who wants to lose 7-2? Years ago we told ourselves we wanted to create history. That was history but obviously the wrong type,” Klopp said.

“We had big chances which we did not use, but when you concede seven I’m not sure you can say it would have been 7-7.

“We made too many mistakes and massive ones obviously. It started with the first goal and around the goals we made massive mistakes.

“We lost balls in the wrong area and did not protect properly. It looked like we lost the plot after it went to 1-0. It is not an excuse.

“Normally you can be 1-0 down and do the stuff you want to do. We created but did not protect ourselves properly so each ball we lost was a massive counter attack.

“That is why we conceded and three goals were deflected. It’s unlucky but it is not a coincidence because it means it was not a proper block. There is nobody to blame apart from me and us.”

Liverpool fans won’t be at all happy with this, but their side has also been remarkably consistent for the last two years, so were perhaps due a blip.

Manchester City have not made the best start to the season, but Liverpool surely can’t afford too many more slip-ups of Pep Guardiola’s side will be well placed to punish them.