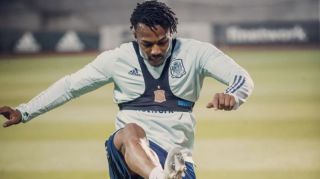 Wolverhampton Wanderers attacker Adama Traore has caused confusion after teaming up with his Spanish compatriots during the current international break despite being called up to represent Mali.

Traore, 24 joined Wolves in 2018 from Championship side Middlesbourugh in a move which cost Nuno Espírito Santo’s side £18m as per TransferMarkt.

After a string of fine performances over the last two-years including 22 direct goal involvements in 95 matches in all competitions, the rapidly paced winger has seen his services required on the international stage.

However, in a bizarre set of circumstances Traore, who shares duel citizenship between both Spain and Mali has appeared to be called-up by both countries.

The Wolves wide-man was named in Mali’s international side to play both Ghana and Iran during the international break but has instead turned up at Spain’s training camp.

Only in January did Traore declare that he was ‘grateful’ to have the choice of representing both countries, however, it appears Traore has now made his decision, although, someone should probably tell Mali.