According to Jim White on talkSPORT, the Hammers were prepared to pay a big loan fee to Chelsea for Tomori, and would also have forked out £50,000 to the Blues every time they didn’t play him.

White says Tomori’s response was “I’m staying, I don’t want to go”, so that was that, and Chelsea fans will probably be glad the young England international ended up staying put.

Defence is not exactly an area of great strength for Frank Lampard’s side right now, so they could use all the options they can get in that department.

Tomori initially looked a big prospect when he returned from a loan at Derby County to become a regular in the Chelsea first-team, though he’s more recently fallen out of favour.

With players like Antonio Rudiger, Andreas Christensen and Kurt Zouma not doing much to impress, perhaps Tomori will soon get another chance to stake his claim for a place.

West Ham will be disappointed, however, after a relatively quiet transfer window that leaves them facing a tough time trying to improve on their disappointing form of last season. 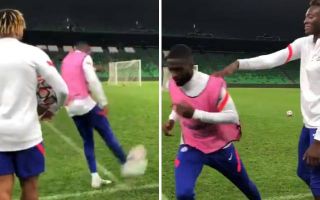