Arsenal completed the signing of Thomas Partey from Atletico Madrid on Deadline Day – but how does the Ghanaian measure up to his midfield counterparts?

The Gunners were crying out for some added quality and steel in the middle of the park, even after their recent resurgence under Mikel Arteta.

Much to the delight of the Arsenal faithful, they made their move and secured the services of Thomas Partey from La Liga heavyweights Atletico in the eleventh hour of the window.

As per Sky Sports‘ report, Arsenal paid in full his £45million release clause. A relatively reasonable price to pay if he is to be the solution they were searching for in the midfield.

Well, Reddit user u/SportsAnalytics2020 has created a chart comparing Partey to his positional counterparts in his ability to break up the play. 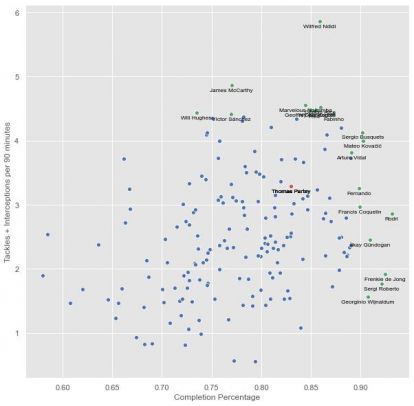 The stats chosen for comparison are his tackles and interceptions per 90, alongside the successful completion percentage in both areas.

Graphs of this nature can often be daunting and difficult to interpret, but to simplify matters, you essentially want to be as high up and far to the right as possible. Partey is the red dot with the bold writing slightly to the right of centre.

William Saliba’s stats vs Palace show he has to stay in the Arsenal team
Video: Big deflection gives Arsenal two goal lead and first win of the season
Newcastle fans may have to brace themselves for an unpopular signing as rumours intensify

While his performance in those two particular areas is pretty impressive, he has been outperformed by now Premier League rivals Mateo Kovacic of Chelsea, Liverpool’s Fabinho and Leicester City’s Kante-lite Wilfried Ndidi.

Is he really the midfield general Arsenal have lacked since the departure of Patrick Vieira? We will just have to wait and see…