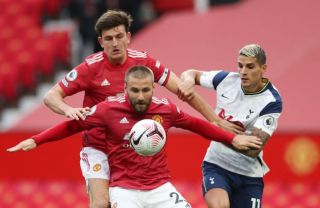 Manchester United defender Harry Maguire is not having the best of times at the moment.

After a controversial summer that saw him get caught up in an unsavoury incident whilst on holiday in Greece, Maguire hasn’t looked at his best since returning to action for Man Utd.

The 27-year-old was particularly poor for the Red Devils in their humiliating 6-1 defeat at the hands of Tottenham at the weekend, and it remains to be seen if he can get back to his best and become the player the club want him to be.

Many fans will no doubt be growing impatient with Maguire, who really hasn’t lived up to his big transfer fee, but England manager Gareth Southgate has heaped praise on him as he returns to the international scene.

“For me it’s just great to have Harry back with us,” Southgate is quoted by BBC Sport. “He’s been a massive player for us over the last two or three years since he came in.

“He’s an exceptional player, I find him a great guy to work with and we are delighted to have him back in the England squad.

“We would rather have Harry Maguire in our squad than not, that’s a 100% sure.”

United and England fans will no doubt hope these words can lift Maguire’s confidence and help him play at the level that won him huge admiration in his time at former club Leicester City.