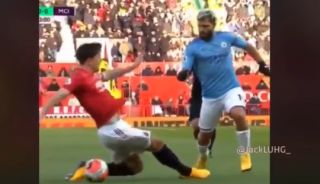 Harry Maguire is not having the best time for Manchester United at the moment, but many will no doubt feel he never really got going after his big move from Leicester City last summer.

The England international shone during his time with the Foxes, but some eyebrows were raised when Man Utd forked out a staggering £80million for him, which could rise even further through add-ons.

A fan has now put together a compilation video of some of Maguire’s worst moments, and there really are some shockers in here for a defender signed for that amount of money…

Some United fans will surely keep backing Maguire, and argue that he’s far from the only player who’s struggled to perform at their best in Ole Gunnar Solskjaer’s dysfunctional side.

Paul Pogba has also struggled for much of his Old Trafford career, while top players like Angel Di Maria, Romelu Lukaku and Alexis Sanchez also got far worse after joining the club.

There’s no question, however, that the video above shows plenty of very basic errors from Maguire and, as good a player as he can be, he is always going to be judged extra harshly over his huge price tag.